The mall next door: An insider’s guide to Park MeadowsNews and Events

SmartTouch Interactive
The mall next door: An insider’s guide to Park Meadows

The media helicopters were circling at the 1996 opening of Park Meadows—freshly dubbed “Colorado’s only retail resort.” And it actually was a newsworthy project. Instead of just tossing up another boxy shopping behemoth, the developers went with a classic mountain theme, using lots of stone and timber, big cushy seats, an appealing mix of restaurants, and the relaxed vibe of a Colorado mountain lodge. Park Meadows won design kudos, including the ICSC’s International Design and Development Award and the Urban Land Institute’s Award of Excellence.

Obviously, this was a strategy that paid off. Nearly two decades later, Park Meadows still pulls ‘em in from far and wide. Park Meadows continues to revamp and refresh, expanding its borders with new shops and restaurants, and giving south metro residents the variety and quality they crave. 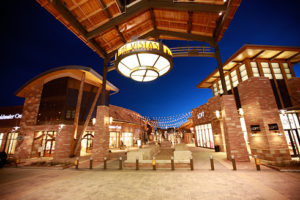 If you live in Stepping Stone, you’ll be a mere 11 minutes from shopping nirvana. Want an easy source for your go-to brands? There’s Dillard’s, Victoria’s Secret, Banana Republic, Apple, Tommy Bahama, the Gap, and the pinnacle-of-service Nordstrom, of course. Want to venture beyond the usual list of mall suspects? You’ll find lululemon, Anthropologie, American Girl, Michael Kors, Vera Bradley, The LEGO Store, Crate & Barrel, and even Tesla. (Really, there just aren’t many malls where you can you buy an $80,000 car.)

Park Meadows is terrific for dining out, too. Can’t decide where to meet? Start driving to Park Meadows and you’ll figure it out once you get there. The food court offers something for everyone, if time or money is short. But there are also 13 great restaurants on premise and counting (and dozens more options on the surrounding streets). Established faves include P.F. Chang’s China Bistro, The Cheesecake Factory, White Chocolate Grill, BRIO Tuscan Grille, Bonanno Brothers Pizzeria, Yard House and La Sandia. Opening this month: LYFE Kitchen, where the big idea is local, organic, sustainable and tasty, yet under 600 calories. Seasons 52, a seasonally inspired grill and wine bar, is opening this summer, and Perry’s Steakhouse & Grille is opening in September. For a full list of all shops and restaurants, visit the Park Meadows website.